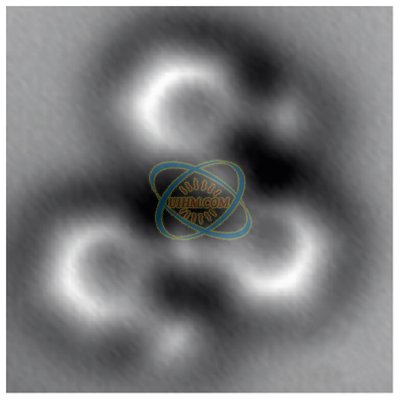 Almost as clearly as a textbook diagram, this image made by a noncontact atomic force microscope reveals the positions of individual atoms and bonds, in a molecule having 26 carbon atoms and 14 hydrogen atoms structured as three connected benzene rings. Credit: Lawrence Berkeley National Laboratory and University of California at Berkeley

When Felix Fischer of the U.S. Department of Energy's Lawrence Berkeley National Laboratory (Berkeley Lab) set out to develop nanostructures made of graphene using a new, controlled approach to chemical reactions, the first result was a surprise: spectacular images of individual carbon atoms and the bonds between them.

"We weren't thinking about making beautiful images; the reactions themselves were the goal," says Fischer, a staff scientist in Berkeley Lab's Materials Sciences Division (MSD) and a professor of chemistry at the University of California, Berkeley. "But to really see what was happening at the single-atom level we had to use a uniquely sensitive atomic force microscope in Michael Crommie's laboratory." Crommie is an MSD scientist and a professor of physics at UC Berkeley.

What the microscope showed the researchers, says Fischer, "was amazing." The specific outcomes of the reaction were themselves unexpected, but the visual evidence was even more so. "Nobody has ever taken direct, single-bond-resolved images of individual molecules, right before and immediately after a complex organic reaction," Fischer says.

The researchers report their results in the June 7, 2013 edition of the journal Science, available in advance on Science Express.

Graphene nanostructures from the bottom up

Graphene nanostructures can form the transistors, logic gates, and other elements of exquisitely tiny electronic devices, but to become practical they will have to be mass produced with atomic precision. Hit-or-miss, top-down techniques, such as exfoliating graphite or unzipping carbon nanotubes, can't do the job.

Fischer and his colleagues set out to engineer graphene nanostructures from the bottom up, by converting linear chains of carbon atoms into extended hexagonal sheets (polyaromatic hydrocarbons), using a reaction originally discovered by UC Berkeley professor Robert Bergman. The first requirement was to perform the reactions under controlled conditions. 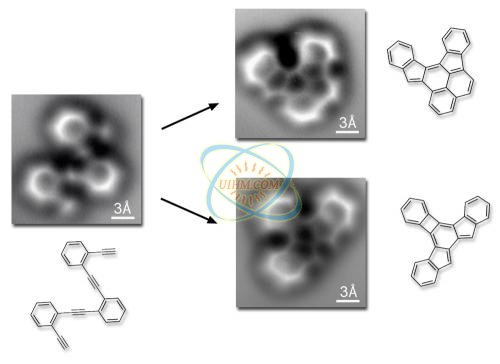 The original reactant molecule, resting on a flat silver surface, is imaged both before and after the reaction, which occurs when the temperature exceeds 90 degrees Celsius. The two most common final products of the reaction are shown. The three-angstrom scale bars (an angstrom is a ten-billionth of a meter) indicate that the reactant and product molecules are about a billionth of a meter across. Credit: Lawrence Berkeley National Laboratory and University of California at Berkeley

"In solution, more than a dozen compounds could be the products of the reaction we were using, and characterizing the results would be difficult," Fischer says. "Instead of a 3D solution we created a 2D system. We put our starting molecule" – a structure called oligo-enediyne, composed of three benzene rings linked by carbon atoms – "on a silver surface, and then induced reactions by heating it."

Fischer's group collaborated with microscopy expert Crommie to devise the best possible view. The first attempt to track the reactions used a scanning tunneling microscope (STM), which senses electronic states when brought within a few billionths of a meter (nanometers) of the surface of the sample. But the image resolution of the tiny molecule and its products – each only about one nanometer across – wasn't good enough to reliably identify the molecular structures.

The collaborators then turned to a technique called noncontact atomic force microscopy (nc-AFM), which probes the surface with a sharp tip. The tip is mechanically deflected by electronic forces very close to the sample, moving like a phonograph needle in a groove.

"A carbon monoxide molecule adsorbed onto the tip of the AFM 'needle' leaves a single oxygen atom as the probe," Fischer explains. "Moving this 'atomic finger' back and forth over the silver surface is like reading Braille, as if we were feeling the small atomic-scale bumps made by the atoms." Fischer notes that high-resolution AFM imaging was first performed by Gerhard Meyer's group at IBM Zurich, "but here we are using it to understand the results of a fundamental chemical reaction." 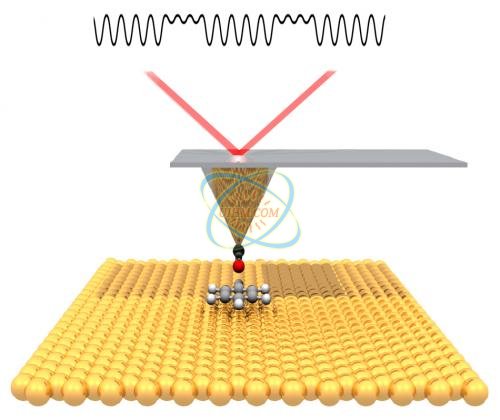 The single-atom tip of the noncontact atomic force microscope "feels" changes in the strength of electronic forces as it moves across the surface at a constant height. Resulting movements of the stylus are detected by a laser beam to compute

The single-atom moving finger of the nc-AFM could feel not only the individual atoms but the forces representing the bonds formed by the electrons shared between them. The resulting images bore a startling resemblance to diagrams from a textbook or on the blackboard, used to teach chemistry, except here no imagination is required.

Says Fischer, "What you see is what you have – the effects of the electron forces among the atoms, and even the bond order. You can distinguish single, double, and triple bonds."

A chemical bond is not as simple a concept as it may appear, however. From the dozens of possibilities, the starting molecule's reaction did not yield what had intuitively seemed to Fischer and his colleagues the most likely products. Instead, the reaction produced two different molecules. The flat silver surface had rendered the reaction visible but also shaped it in unexpected ways.

The nc-AFM microscopy provided striking visual confirmation of the mechanisms that underlie these synthetic organic chemical reactions, and the unexpected results reinforced the promise of this powerful new method for building advanced nanoscale electronic devices from the bottom up.

Before much more complex graphitic nanostructures can result from this unique approach, says Fischer, "Large discoveries lie ahead."