induction PLATING OF STEEL IN VACUUM

We investigated chromium plating of steel heated in vacuum by high frequency induction. The chromium
plating mixture was low carbon ferroehromium. We used steel No. 10 and steel U8 in our experiments.
The current source was the GL-15M 8.5 kW tube generator, the frequency being 575-715 kHz. The diagram
of the apparatus for chromium plating in vacuum is shown in Fig. 1. 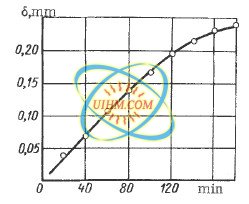 The samples were 10-20 mm long and 10 mm in diameter. Their temperature was kept constant at 1000-
1200~ +10 ~ The temperature was measured with a thermocouple electrically soldered to the surface of the sample
(the diameter of the wire was 0.2 ram). The temperature was kept constant by changing the induction circuit of the
anode connected to the control voltage of the generator tube. A filter consisting of an inductance and a shunting
capacitance was connected in the circuit to protect the galvanometer from the induced current.
During thermodiffusional saturation of the sample the material of the thermocouple is also saturated and, as
the result, its thermo-emf changes. We investigated the variation of the thermo-emf at different temperatures and
heating times. The proper corrections of the temperature indications were made during the experiment.
The steel was subjected to diffusional saturation in a mixture consisting of 50% ferrochromium and 50~ fire
clay; the pressure in the chamber was 1" 10 -a mm Hg. We also used a mixture consisting of 50% ferrochromium,
48% fire clay, and 2% NHaCL When this latter mixture was used, the vacuum pump was disconnected after a pressure
of 1 9 10 -amm Hg was reached and the metal was heated. Since ammonium chloride undergoes decompositi
Next: tubular Induction brazing wiresPrevious: Cadmium in silver soldering or brazing